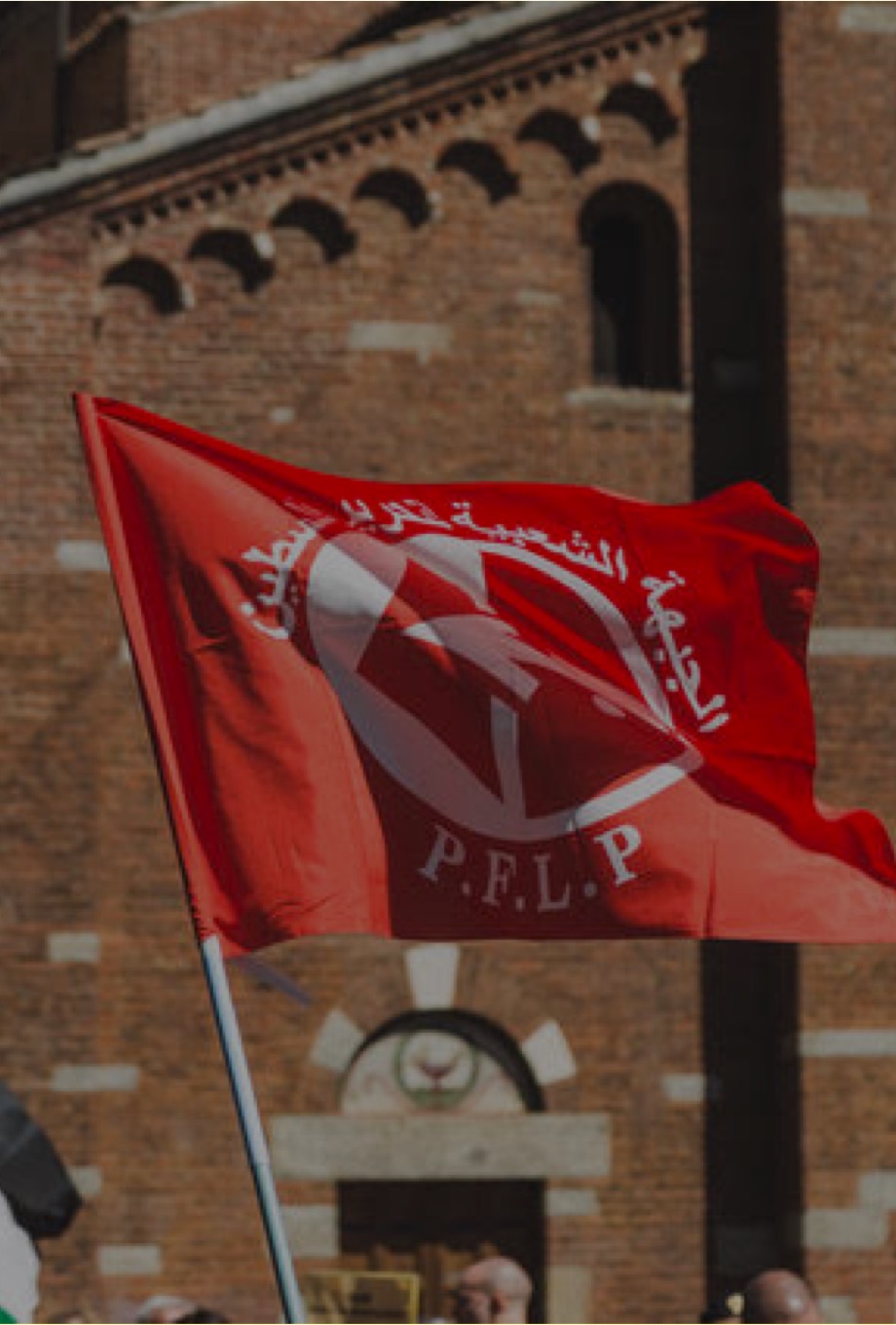 Founded by George Habash in 1967, the PFLP is a Palestinian, secular, Marxist-Leninist terror group, originally supported by the Soviet Union and China. The PFLP is designated as a terrorist organization by governments around the world, including the US, EU, Canada, and Israel.

Since its inception, the terror group has been involved in suicide bombings, shootings, and assassinations, among other attacks targeting civilians. The group was well-known for hijacking commercial airlines in the 1960s and 1970s, involving thousands of civilians in Europe, the Middle East, and Africa, and is responsible for countless deaths and injuries.

Terror attacks committed by the PFLP include: In 1976, its members joined with the Baader–Meinhof Gang (a West German terror group) to hijack an Air France Tel Aviv-bound flight, diverting it in Entebbe, Uganda. In 2001, the PFLP assassinated Israeli Minister of Tourism Rehavam Ze’evi . In 2011, PFLP members took credit for the house invasion and murder of the Fogel family, including a baby and two young children. The terrorist group was also responsible for the 2014 massacre at a synagogue in Jerusalem’s Har Nof neighborhood, murdering four worshipers and an Israeli Druze police officer. In August 2019, a PFLP terror cell carried out a bombing against Israeli civilians, murdering 17-year-old Rina Shnerb, and injuring her father and brother.

The PFLP has never recognized the State of Israel and opposes all negotiations , calling, regularly by means of violence, for the “liberation” of all of “historical Palestine.”

The PFLP and Civil Society

The PFLP also engages in a number of politically oriented functions meant to foster an image of legitimacy and bolster the group’s ideological and military goals. As stated in a 1993 USAID-engaged audit, “most major Palestinian institutions, especially in the health, agricultural, and industrial sectors, are affiliated with one of the principal factions,” such as the PFLP, “of the Palestine Liberation Organizations.” The USAID-engaged audit affirms that the PFLP and other factions “have built a relatively sophisticated network of grassroots institutions in the West Bank and Gaza… Each significant political actor has attempted to build an institutional base of support or control in the occupied territories…” (emphasis added).

The logic of creating a cluster of civil society organizations is consistent with the PFLP’s operating principles, including utilizing the political sphere to influence the military. For instance, in The PFLP’s Changing Role in the Middle East (2014), Harold M. Cubert writes that “The PFLP seeks to create a system in which it can move its members between military and political tasks interchangeably” adding that the group “sees itself as a living organism whose goal it is to reverse Israel’s establishment and to acquire for the Palestinians the rights which it feels they have always deserved. Each of the PFLP’s components is essential to its existence and each is given equal importance.” In other words, the PFLP supplements its terrorism with civil society activities, to promote its goals and gain political support.

The same assessment of the PFLP’s political dynamic is shared by Palestinian observers. For instance, Ramzy Baroud, a US-Palestinian journalist, describes that by “still adhering to the fighting spirit of a socialist, militant and radical movement, the PFLP is also forced to co-exist within a corrupt political structure; opposing it, while benefiting from it at the same time. Many NGOs are loosely affiliated with PFLP members, which gives the group a degree of physical presence…” Khaled Barakat, a PFLP “leader” and speaker for the PFLP-linked NGO Samidoun, explained that “the students and the labor movement and children and women from kindergarten all the way to the military resistance is one national liberation movement and every component of it is important.” A 2019 indictment of Abdul Razeq Farraj notes that another PFLP member Itiraf Hajaj (Rimawi) would be responsible for the PFLP’s “university and school activities.”[1]

A 2015 ruling by Israel’s Minister of Defense further articulates the clear links between the PFLP and civil society organizations. In addition to declaring that “the group of people or institutions or association known as the ‘Union of Health Work Committees-Jerusalem [HWC]’…or ‘Health Work Committees’…or any name that association will be known by, including all factions and any branch, center, committee or group of this association is an  unauthorized association.” The ruling also details that the civilian activities of the organization “draw a systematic picture, indicating deep involvement in achieving the organization’s [PFLP] goals – which are terrorist attacks against Israel with the aim of compromising state security.”

“True, financial aid for a high school graduation party or a gift to needy families or help for a released prisoner may, in and of itself, be ‘innocent’ acts in other contexts. However, in the context of these actions, they involve a body which, in addition to its civil activity, has military-terrorist aims designed to achieve the purpose of terrorist warfare aimed at inflicting bodily harm against Israelis. That is, the civilian activity of the organization is intended to assist military activity and serve as a basis for it. Therefore, we are unable to isolate the civilian function and the military function of the group. Any separation of the two is therefore artificial…”

The PFLP and “Human Rights”

Another way the PFLP attempts to gain legitimacy is by co-opting the discourse of human rights and international law. The terrorist group gains a “halo,” where outside observers associate the terror group with positive progressive values instead of violence. Moreover, the rights-based rhetoric serves to justify attacks against civilians, obscuring of its ultimate goal – i.e. the elimination of Israel.

For example, one of the pillars of the PFLP platform is “Defense of human rights and the struggle for the release of prisoners and political prisoners.” Notably, for the PFLP, “human rights” is consistent with referring to terrorists as “political prisoners.” Other pillars speak of the importance of Palestinian youth, alongside “stepping up the development of forms of revolutionary violence against the Zionist enemy.”

Thus, the PFLP has praised its members for “defending the rights” of Palestinian people through “resistence” – code for terrorism. As framed by PFLP leader and writer Ghassan Kanafani, “To us, to liberate our country, to have dignity, to have respect, to have our mere human rights is something as essential as life itself.” In a slightly different vein, this is how Raji Sourani, the head of the Palestinian Center for Human Rights, can reportedly label as a “critical humanitarian document” a book written by PFLP General Secretary Ahmed Sa’adat.

Leading PFLP officials have also cynically accused Israel of committing “war crimes” and violating international law and have called for Israel to be referred to the “International Criminal Court” – allegations and calls that are echoed by NGOs linked to the PFLP.

The PFLP and NGOs

As noted, the PFLP has established a number of non-governmental organizations (NGOs) that also exploit human rights and international law rhetoric as part of their political agendas.

The PFLP website refers to the Democratic Association of Lawyers as a professional framework associated with the PFLP and the Progressive Student Labor Front (PSLF) as one of the terror group’s student organizations. The latter organizes PFLP military training camps for Palestinian youth and hosts events in Palestinian schools. NGO staff are regularly seen in attendance at PSLF events, graduations, and other ceremonies featuring PFLP paraphernalia.

Numerous NGOs are also identified by government sources, academics, and/or other Palestinian groups as official affiliates of the PFLP terror group. For example, the USAID-DIS document lists the Union of Health Work Committees (UHWC) as the coordinator of “the PFLP’s health care network,” the Union of Agricultural Work Committees (UAWC) as providing “the PFLP’s agricultural extension services,” and the Union of Palestinian Women’s Committees (UPWC) as the “PFLP’s women’s committee.”[3] Fatah lists these three as PFLP “affiliates,” as well as the prisoner advocacy group Addameer.

In 2015, Israel’s Minister of Defense, the Jerusalem District Court, and the Israeli High Court also noted the PFLP ties of Health Work Committees (HWC), UHWC’s “sister organization” in the West Bank and Jerusalem.

In addition to the NGOs with more formal connections to the PFLP, other groups regularly participate in PFLP events and/or advocate on behalf of PFLP terrorists. In November 2018, Al-Dameer organized a seminar “in coordination with the prisoners’ committee of the PFLP” on “administrative and the continued arrest of Khalida Jarrar” (on file with NGO Monitor, see PFLP website for details). In June 2015, according to the PFLP, the PFLP’s prisoner committee participated in a workshop organized by the Palestinian Center for Human Rights (PCHR). According to the PFLP, the event took place in solidarity with Khader Adnan, accused by Israel of being a member of the Palestinian terror group Palestinian Islamic Jihad, during his two-month long hunger strike. UPWC’s president has stated that her organization is the PFLP’s “feminist framework,” and the NGO and terror group both participated in a 2017 event that appears to have been sponsored by the EU.

Finally, staff members, founders, board members, general assembly members, and senior staff members from a number of NGOs have ties to the PFLP terror group. Some of these individuals are employed in financial positions at the NGOs, calling into question funding oversight by the EU, the UN, European governments and other donors, and increasing the risk of diversion of public funds to an internationally designated terrorist group.

[1] Farraj was indicted for “holding a position in an illegal organization,” recruiting new members into the PFLP, and aiding an attempt to cause death in connection to an August 23 bombing that killed a 17-year-old Israeli girl and Rimawi, according to the Israeli Security Agency, for being responsible for PFLP clandestine operations.

[3] Academic Glenn E. Robinson affirms the PFLP affiliation of UHWC and UAWC, stating that UAWC was founded in 1986 by “agronomists loosely affiliated with the PFLP.”